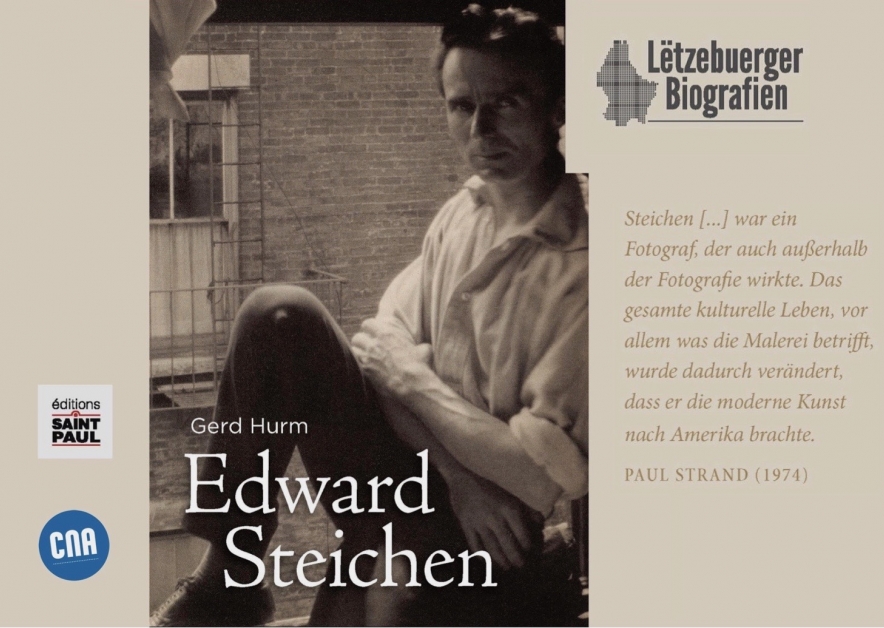 The fascinating life and world-famous work of Edward Steichen, an American photographer of Luxembourg origin and a multi-talented artist, is at the center of this monography, which is conceived at the same time as a reinterpretation of the history of modern art. On the basis of new research, Gerd Hurm explains why, in works on 20th century art, Edward Steichen, his artistic projects and his commitment to pacifism, human rights, are rarely discussed. Gerd Hurm's study thus offers a new, unsuspected illumination of Steichen's work. The Luxembourg collections dedicated to Steichen, including the installation "The Family of Man" in Clervaux (World Heritage Documentary, UNESCO, 2003), play a special role in his book which was published in the series "biographies luxembourgeoises" Editions Saint -Paul in collaboration with the Centre national de l'audiovisuel (CNA).
The author writes in his study: "Steichen is one of the great enigmas of modernity. Born in Luxembourg, he grew up in Milwaukee and worked successfully in Europe and the United States, leaving a breathtaking work. He has worked as an avant-garde and plant breeder, war reporter and children's book illustrator, fashion photographer and museum director, ecologist and conceptual artist, textile designer and curator. In his life as in his work, he has campaigned for pacifism, human rights, multicultural tolerance and gender equality. Intellectuals and artists as diverse as August Rodin and Eleanor Roosevelt, Dorothea Lange and August Sander, Gerhard Richter and Angela Davis, Consuelo Kanaga and Sebastião Salgado reacted enthusiastically to Steichen's artistic projects. Nevertheless, even in the twenty-first century, art critics remain extremely divided as to the impact of his work on the evolution of modern art."

Buy the book at CNA's e-shop.
Link to the editor.